Added to wishlistRemoved from wishlist 0
$542.00 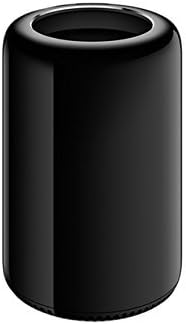 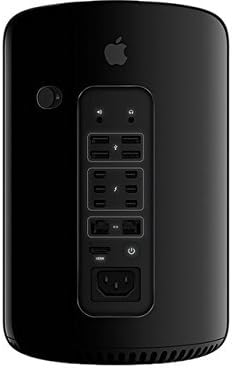 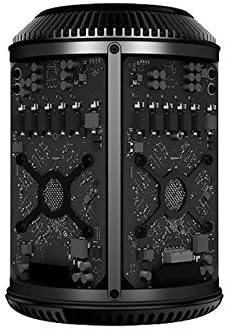 There is no mistaking the “Late 2013” Mac Pro models for earlier ones as they present an Apple described “radical” departure from the large, highly expandable tower case design of yore and instead feature a compact dark gray, glossy cylinder design that is approximately one eighth of the mass but has limited internal expansion. Apple explained that these “Space Gray” cylinder Mac Pro models are “designed around an innovative unified thermal core” and have not only faster processors than earlier models but also dual workstation class graphics processors, faster memory, and faster PCIe 2.0 x4 flash storage. Instead of internal expansion, the system provides extensive high speed ports for external connectivity options. Specifically, this model — the Mac Pro “Quad Core” 3.7 (Late 2013) — is powered by a single 3.7 GHz Quad Core 22-nm Xeon E5-1620v2 processor with a dedicated 256k of level 2 cache for each core and 10 MB of level 3 “Smart Cache.” Configured with 32 GB of 1866 MHz DDR3 ECC SDRAM, a 256GB SSD, and dual AMD FirePro D300 graphics processors with 2 GB of GDDR5 memory each. Connectivity includes six Thunderbolt 2 ports, one HDMI 1.4 UltraHD port, 4 USB 3.0 ports, and Dual Gigabit Ethernet ports in addition to 802.11ac and Bluetooth 4.0. Originally, this model reportedly supported as many as three 4K displays or six Thunderbolt displays. However, on June 16, 2015, without updating the graphics cards themselves, Apple quietly increased the official support to as many as three 5K displays (5120×2880) — two using Thunderbolt 2 ports and one using the HDMI port. The support for as many as six 2560×1600 displays using all six Thunderbolt 2 ports remained unchanged.